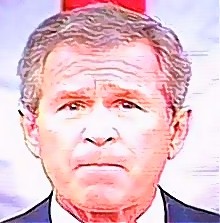 There is no area that has been left untouched by the disastrous policies of the Bush Administration, whether it be in education, health, science, the environment, the national debt, civil liberties, or the waging of illegal war.

The worst collection of crooks, cronies, and lobbyists have been assembled to manage things for their own benefit, and the benefit of their corporate relations, at the expense of the people, and hundreds of millions of dollars have been mismanaged, poorly spent, wasted, or lost.

The most delusional and incompetent ideologues have been given reign over our national policy, and they have mislead us into an illegal war and mismanaged its aftermath. Their actions have made us less safe and more despised, while undermining our liberties and ideals and accomplishing the opposite of what they intended.

Their pattern of incompetence is consistent, from 9-11 to Katrina, with their lack of planning for the aftermath of the invasion of Iraq in-between.

From lying us into war to violating FISA laws, from the erosion of the separation of church and state to illegal use of funds, from a war on science to a war on our troops, and from the power-grab of the so-called “unitary” executive to redefining torture, this has been the worst administration ever.

This is a matter of the rule of law, which must not be put aside for political expediency. Justice must be done regardless of the consequences. Those responsible must be held accountable for the good of the people and the protection of the Republic.

We the People must give this notice to any elected official who claims to be our representative or hopes to gain or maintain our support:

Any Congressperson who doesn’t at least attempt to protect the Constitution by holding this administration accountable for their actions by supporting impeachment proceedings isn’t worthy of our trust, respect, or vote in 2008, since they will have demonstrated they are more concerned about politics than their sworn duty to the country and the people.