A 2014 study conducted by Princeton and Northwestern universities concluded that: “The central point that emerges from our research is that economic elites and organized groups representing business interests have substantial independent impacts on US government policy, while mass-based interest groups and average citizens have little or no independent influence” and “Americans do enjoy many features central to democratic governance, such as regular elections, freedom of speech and association and a widespread (if still contested) franchise. But we believe that if policymaking is dominated by powerful business organisations and a small number of affluent Americans, then America’s claims to being a democratic society are seriously threatened.”

The study found that the influence of the average American is at a “non-significant, near-zero level.”

“The real owners are the big wealthy business interests that control things and make all the important decisions. Forget the politicians, they’re an irrelevancy. The politicians are put there to give you the idea that you have freedom of choice. You don’t. You have no choice. You have owners. They own you. They own everything. They own all the important land. They own and control the corporations. They’ve long since bought and paid for the Senate, the Congress, the statehouses, the city halls. They’ve got the judges in their back pockets. And they own all the big media companies, so that they control just about all of the news and information you hear. They’ve got you by the balls. They spend billions of dollars every year lobbying ¬ lobbying to get what they want. Well, we know what they want; they want more for themselves and less for everybody else.”

Carlin argued that we only have the ‘illusion’ of choice. The Princeton and Northwestern study indicates this may be the case: that we already have an oligarchy posing as a democracy.

Probably the #1 progressive issue –above and beyond all others–is the legalized corruption that is taking place in our government which has undermined our democracy to the point that the influence of the average American is at a “non-significant, near-zero level.”

Now, if one REALLY believes that climate change is an EXISTENTIAL threat to humanity, and that we only have about 12 years to turn things around before we are screwed like the climate scientists are telling us (which obviously means that we need to START taking BOLD action ASAP in order begin to turn things around by the 12 year mark), then we will need someone LEADING who will PUSH to take the BOLD action we need to save ourselves.

Polls continue to show that this kind of legalized corruption is a top concern among all voters.

So, if Trump gets reelected, we’re screwed, BUT if we elect a candidate who is willing to compromise humanity’s future by not taking bold enough action regarding climate change in time, we are just as screwed.

This is just ONE reason I support progressive candidates like Bernie Sanders and Justice Democrats like AOC. They’re NOT corrupted by the establishment oligarchy, so they can actually represent the People instead, and they are already pushing for BOLD action regarding climate change.

I would not be willing to bet humanity’s future on anyone who is corrupted by corporate interests, no matter what they might promise to get elected.

If it’s purely a matter of who stands the best chance of beating Trump, regardless of who it is, I think the best argument could be made for Sanders…

The energy in the Democratic Party is in the progressive wing. That’s the wing that has the most grassroots support.

Not long ago the NYT published a map of candidates with the most individual donors across the U.S. (see below).

Bernie Sanders was represented in blue, and blue so dominated the map across the country they had to provide another map that didn’t include him so people could see where all the support for the other candidates were. 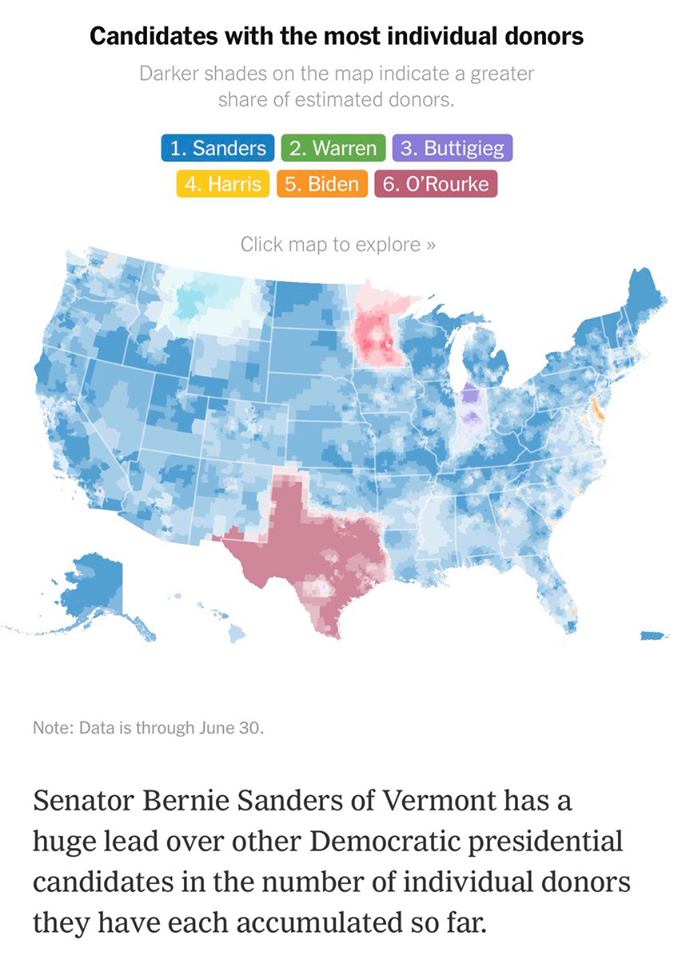 I could also make the argument that despite many of his policy positions being labeled as “radical” and “far left,” they are actually popular and mainstream, but I’ll save going into that here for brevity’s sake.

Right now, the two most viable progressive candidates running are Bernie Sanders and Elizabeth Warren. The polls are currently showing them 2 and 3 behind Biden (but together they make up a larger share of Democrats who support them).

Biden is polling best at the moment, but I expect that gaffe machine to eventually self-destruct. And he doesn’t have nearly the grassroots support that Bernie does… or any of the energy.

IMO, anyone with a pulse SHOULD be able to beat Trump in 2020. However, I think the ONLY way Democrats MIGHT lose is if they run another establishment Democrat against a populist once again.

IMO, running establishment, so-called “centrist” candidates (who would rather reach out to Republicans and get their hands slapped every time than inspire their base) is what caused Democrats to lose 1,000 seats across the country leading up to 2016, and it’s what caused all three branches of government to fall into Republican hands before the last mid-terms.

IMO, Trump was so detestable, he inspired enough Democratic voters to get off their asses and give us back the House in the last mid-terms–and hopefully that is evidence of what will happen in 2020–BUT a sure way to KILL that motivation is to spit in the eye of progressives once again.

My hope is that Sanders and Warren come together for the win in the end. I think that will inspire the most enthusiasm and give us the best chance for a landslide that will carry over to the House and Senate (so it will be easier to get progressive policies passed).

EVEN IF, we elect someone as supposedly “radical” as Sanders (or even Warren), it’s going to be a tremendous uphill battle to bring about the changes needed to get back our democracy and save our planet for humanity.

REMEMBER: for those who may still think progressive ideas are too radical… we don’t elect monarchs or dictators, so whoever is elected probably won’t be able to get all of what they want done to the extent they want to get it done. They will still have to FIGHT for it, and what they do get done will probably end up getting watered down by the opposition (even the opposition in their own party).

But I think Democrats (in general) have forgotten how to get things done.

You DON’T START OUT by trying to compromise.

Democrats should relearn how to play the game Tug-of-War…

In my opinion, the best and easiest way we can “unify” is for those who would normally back an establishment candidate to back a REAL progressive this time. That way we can keep the energy on our side and bring in younger voters (who might not normally vote).

Now is NOT the time for incrementalism or compromises with corrupt politicians.

Now is the time for bold and dramatic action to save ourselves, our democracy, and our planet.

Right now, I think Sanders and Warren are the most viable candidates who stand a ghost of a chance of doing that.

MLK argued against the “tranquilizing drug of gradualism” when he said, “We are now faced with the fact that tomorrow is today. We are confronted with the fierce urgency of now. In this unfolding conundrum of life and history, there ‘is’ such a thing as being too late. This is no time for apathy or complacency. This is a time for vigorous and positive action.”

If we ever had a time when there was the “fierce urgency of now,” this is it.

If that doesn’t happen, we are screwed.

And it may already be too late.

I have more reasons I could go into, but this should be enough for now.