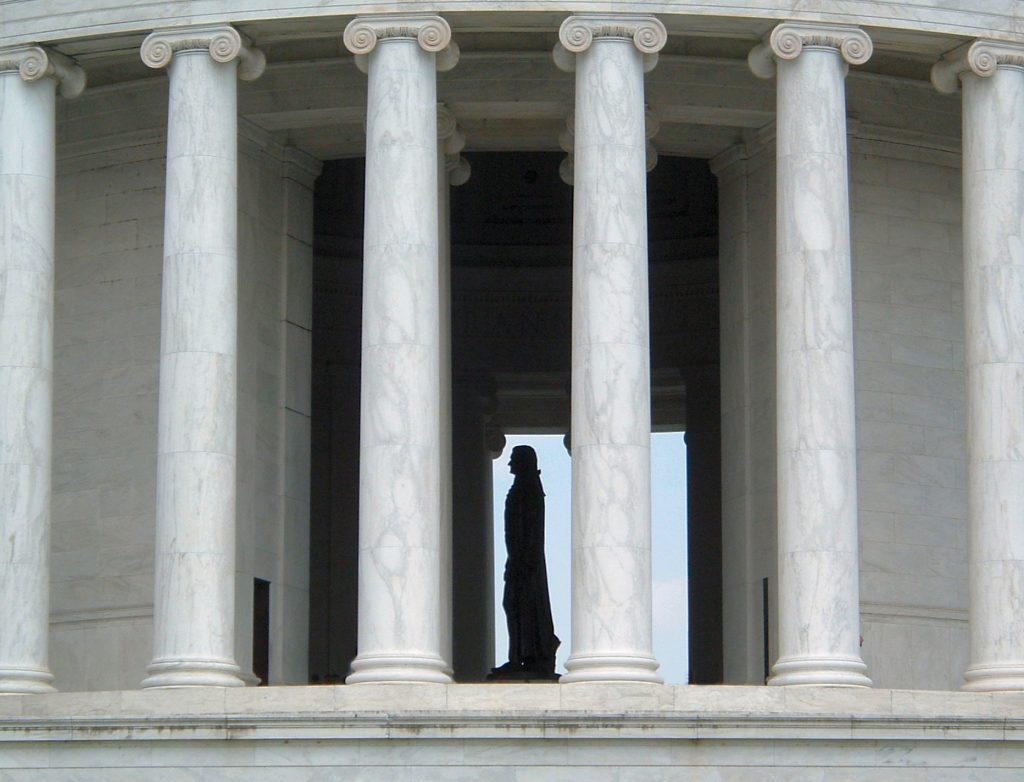 Although I’ve read just about every biography on Thomas Jefferson in print (including Dumas Malone’s 6 volume work), all of the correspondence between him and John Adams, the Library of America volume “Jefferson Writings” (including his autobiography, his “Notes on the State of Virginia,” and selected letters, addresses, and public and private papers), multiple biographies of all the primary founders he interacted with (Washington, Franklin, Madison, Monroe, Adams, Hamilton, etc.), books on his friendship and association with Madison, multiple history books that covered him, and many essays/articles/encyclopedia entries/etc. about him on and offline, as well as watched many documentaries (including Ken Burns’ “Thomas Jefferson”), I’m still occasionally surprised to learn something new about him when I don’t expect to….

Time after time I run across sentences that start like this. “Although Thomas Jefferson’s interests in [x] is little known…”

For example, several years ago I was reading a book on codes.

I got to the section of the book called “Cipher Devices and Machines.” The very first entry is: “Thomas Jefferson’s Wheel Cypher.” It starts out by saying, “Although Thomas Jefferson’s cryptographic interests are not well known, he designed a cypher device which was the basis of one adopted by the U.S. military over a hundred years later.” Later it says, “This device was well ahead of its time and in fact superseded a number of attempts in Europe. Yet neither the United States military nor the fledgling diplomatic corps was to benefit from the wheel cypher because Thomas Jefferson apparently never used it. Occupied with his many activities and presidential responsibilities, he put it aside. Not until 120 or so years later was a similar version of the wheel cypher made available to the U.S. armed forces, and its worth is verified by the fact that the U.S. Navy made use of such a mechanism for decades after its introduction.”

Doing some additional research on it, I find it described as the “oldest known cipher device,” that it was “beyond doubt the most advanced, secure and user friendly cipher system of its time,” and this:

“Jefferson’s wheel cipher was to be reinvented at least twice. Etienne Bazeries, a French military cryptanalyst, invented his Bazeries cylinder in 1891 but it was never adopted by the military. Then Captain Parket Hitt of the US Army invented it in strip form in 1913. The strip form was made into a cipher called the M-138A. In 1915, Major Joseph Mauborgne redesigned it into the 25 wheels of the M-94, which became the main battlefield cipher for the US military until 1942. …

“The US M-94, except for the number of wheels, is an exact replica of Jefferson’s cipher wheel. Jefferson’s invention of this 120 years earlier, while being somewhat preoccupied with the founding of a new country, is testament to his extraordinary genius. The concept of a rotor device with interchangeable wheels was the precursor to the various rotor-based cipher machines, such as the Enigma and Hagelin machines, which were developed in the early 1900s.”

Note that the number of wheels in the M-94 was 25 and Jefferson’s wheel cipher had 36.

I really wasn’t expecting to run across Jefferson while reading a book about codes, but I keep getting re-introduced to him in surprising situations.

For example, did you know that Jefferson was probably the foremost wine connoisseur of his time?

When he was living in Paris as the American Minister to France, he made two wine country tours (traveling as a tourist and paying his own way) through France, Germany, and Italy. He took meticulous notes on viticulture and winemaking practices that each of these areas weren’t sharing with each other, so he came to know more than any other single individual of his time about the subject. He imported great quantities of wine to America and started the first vineyard in the U.S. near his home at Monticello.

He is considered to be the “Forefather of the American Wine Industry.”

Did you know he is also considered the “Father of our National Architecture”?

He was already well educated in architecture before his time in France, and took the opportunity to study European architecture in his travels and time there. He is considered the earliest of the great American architects. Aside from designing his homes Monticello and Poplar Forest [actually training the carpenters and stone and brick workers himself], he also designed the Virginia State Capitol, the University of Virginia, and helped Charles L’Enfant with the plans and design of the “Federal City” in Washington DC. Jefferson’s influence set a precedent for the neoclassical style of our national architecture.

Did you know he is also called the “Father of American Archaeology”?

As just one example of his efforts in this area, he organized an archaeological expedition to explore an Indian burial mound on his property. According to one source:

“Rather than the commonly accepted excavation method of starting from the top and digging down, Jefferson chose to remove a wedge from the mound, taking care to remove artifacts intact. Inside the barrow he found more than a thousand skeletons in various layers of stone, soil, and bones. He decided that it must have been a communal burial mound for generations of Piedmont Indians….

“In pursuing this dig, Jefferson was the first to use the method of stratification, the study of the way layers of earth and artifacts relate to one another. According to William Kelso, director of archaeology for the Association for the Preservation of Virginia Antiquities, Jefferson’s methodology for this excavation set the standard for archaeological inquiry for a hundred years.”

He had an impact on meteorology. Aside from keeping meticulous weather records all his life and encouraging others to do so, he and the Reverend James Madison (related to President James Madison) made the first simultaneous meteorological measurements in America in 1778. “He was a strong advocate for a national meteorological system, and encouraged the federal government to supply observers in each county of each state with accurate instruments.” The “Thomas Jefferson Award” is “the highest and most prestigious award bestowed upon Cooperative Weather Observers” by the National Weather Service “for outstanding achievements in the field of meteorological observations.” Jefferson also created the U.S. Coast Survey, an ancestor agency of NOAA in 1807.

He had a significant impact in American agriculture. He invented a new type of plow of “least resistance”; he is credited with introducing Brussels sprouts, eggplant, cauliflower, broccoli, olive plants, Italian rice, and various grasses to America; he brought the “Paccan Tree” to the eastern U.S.; and he was one of the first Americans to advocate crop rotation and contour plowing (among other things).

Aside from inventing a new type of plow and the wheel cipher, he is credited with inventing the swivel chair and a spherical sundial, designing an improved version of the dumbwaiter, and perfecting a polygraph machine for duplicating his correspondence among other things (like designing the Great Clock at Monticello).

He wrote the “Manual of Parliamentary Practice for the Use of the Senate of the United States” (the first book on parliamentary procedure in America), developed the United States’ monetary system (was almost the father of the metric system), and was the father of the Patent Office [“The patent system he created remains the basis for the patent system of today. Much of the present structure, rules, and guidelines, were established by him.”]

I could go on and on about his accomplishments, but I’ll just sum up here….

So, aside from his roles as President and Vice President of the United States, American Minister to France, Secretary of State, author of the Declaration of Independence, Governor and Representative of Virginia, Founder of the University of Virginia, author of the Bill to Establish Religious Freedom in Virginia (a precursor to the First Amendment), etc., he was a lawyer, writer, architect, agriculturist, surveyor, naturalist, archaeologist, paleontologist, inventor, diplomat, philosopher, agronomist, linguist, cryptographer, classical scholar, avid reader and collector of books, musician, husband, father, and revolutionary.

He was considered, “A fine mathematician and astronomer, he could reckon latitude and longitude as well as a ship captain. He calculated the eclipse of 1778 with great accuracy and was able to make suggestions for the improvement of almanacs on the equation of time. Jefferson was considered expert in anatomy, civil engineering, physics, mechanics, meteorology, architecture, and botany. He was able to read and write Greek, Latin, French, Spanish and Italian. He was recognized as a pioneer in ethnology, geography, anthropology and… paleontology. Because of his wide range of knowledge, Jefferson was ahead of his time in several lines of inquiry and advanced of contemporary scientists. Even so, Jefferson never failed to acknowledge that in science he was ‘an amateur.'”

The source above relays this fairly well-known story, “President John F. Kennedy, while entertaining a group of Nobel Laureates, quipped that this was probably the greatest gathering of intellect in the White House since Jefferson dined there alone.”