According to Wikipedia, “Easter is the most important religious feast in the Christian liturgical year. It is believed by the Christians to be the resurrection of Jesus, which Christians believe occurred on the third day after his crucifixion around AD 33.”

In fact, it might be said that Christianity stands or falls based on whether or not the resurrection of Jesus actually occurred.

The “evidence” is sketchy.

Jesus isn’t credited with writing anything himself and there are no contemporary accounts of his life or death. The earliest texts mentioning him come from “Paul the Apostle.” Paul never met Jesus, and Paul’s first writings are dated roughly 15-20 years after Jesus’ supposed death (and Paul doesn’t reveal any knowledge of Jesus’ birth, or much of his life or his ministry, so he isn’t a good source for an historical Jesus).

Paul relays stories of people who he says Jesus appeared to after his death and ends this list with himself (1 Corinthians 15). It is certainly unclear if he is describing some kind of “spiritual vision” or an actual bodily resurrection since he includes his experience on equal footing with the other appearances (and his experience seems to have been of the former type).

The four so-called “Gospels”–which are supposed to be the primary accounts of Jesus life, death, and resurrection–were written even later, decades after the fact (and none of those were written by actual eye-witnesses). [We can include the “Acts of the Apostles” here as well.]

We do not have the original copies of any of these texts. The earliest sufficiently complete copies we have come hundreds of years after the supposed events. They are fragmentary and are copies of earlier copies, which are themselves copies of earlier copies, and so on, to an unknown degree removed from the originals. Comparisons of the various copies that we do have indicate variations between them and indicate that copying errors occurred.

The sudden appearance of new sections of text in later copies (text that doesn’t appear in any earlier copies) suggest that some things were added later and were most likely not contained in the original versions. This opens up the possibility that additions were made before the earliest copies available to us as well.

Even the originals, from which the flawed copies are derived, were written years and/or decades after the supposed events took place. None of them were written by actual eye-witnesses, so they are second-hand accounts at best. They are actually even further removed from the supposed events than that, either based on prior writings that are lost to us and/or oral traditions that were passed down over time. [The reliability of stories passed down orally should be suspect to anyone who has ever played the game “Telephone.”] Additionally, the original authorship of the various texts is entirely unknown (except for some of the ones said to be written by Paul).

The various texts that we are left with are in conflict with one another in many details regarding the events that supposedly took place. They are also in conflict with what we know about the history, culture, and traditions of that time, place, and people.

They include accounts that are suspiciously similar to other earlier stories that were told about other god-men that we now consider mythological, and these accounts claim various extraordinary and supernatural events taking place that most of us would consider wild, outrageous, and unbelievable were they to be told about something happening in today’s world with no more evidence than what we have here.

Even if we assume that Jesus existed and that the whole story wasn’t an invention, distortion, or in any way embellished, that the written translations were more or less uncorrupted and somewhat accurate translations from the original texts, and that the original texts were based on accurate reports of more or less uncorrupted and somewhat accurate oral accounts given in good faith by actual eye-witnesses (which is quite a LOT to assume), there is still the possibility that the witnesses were mistaken or deceived.

So we have flawed translations of conflicting reports by biased and/or anonymous authors who were relaying hand-me-down hearsay-accounts of wild, extraordinary, and supernatural events given by unsophisticated witnesses, who were possibly duped, mistaken, or lying (if the authors themselves weren’t fabricating or embellishing, which appears likely), and that are suspiciously similar to earlier stories circulating at the time which we now consider unbelievable mythology.

This kind of “evidence” would be laughed out of any court of law today.

It is certainly not much to base your life on.

Occam’s Razor and common sense suggest that there are any number of other more rational/natural explanations for these accounts of supposed events than the one Christians believe.

I think it unlikely that most Christians would even believe it, if they were presented with this evidence for the first time as adults and not brought up to believe it as children when they were most impressionable.

In this case, we have some very extraordinary claims which lack even the minimal requirements for evidence of even ordinary claims.

While I’ll not get into the conflicting resurrection story details found in the various Gospels, I’d just like to review how the resurrection myth developed over time in the Gospels themselves….

In Mark (the oldest gospel), you have an empty tomb and a young man in a white robe to tell what has happened, saying Jesus would be seen in Galilee. In Matthew there is an earthquake and the young man has turned into an angel blazing like lightning, flying down from above to zap a couple of guards and roll away the stone to the tomb with one hand, then saying Jesus would be seen in Galilee (but instead, he shows on up right away and repeats what the angel said). In Luke, the one boy is now two men in dazzling raiment, but rather than Galilee, the place to see the visions has become Jerusalem. Then some more time goes by and we get to the story of John (the last gospel) where the boy in Mark has become two angels!! and Jerusalem is again the place to see visions.

Also, as the myth grows, we see Jesus go to more and more trouble to prove that he has a physical body. In Mark, he isn’t there. In Matthew, they grab at his feet. In Luke, he asks his disciples to touch him and eats some fish. In John, he shows his wounds, breathes on people, and lets Thomas put his fingers into the wounds themselves.

It is as if the authors have more and more they want to try to prove about the resurrection, so they keep adding more details and taking it further and further.

Now it has been taken so far that it has become The Greatest Lie Ever Told.

“And, behold, the veil of the temple was rent in twain from the top to the bottom; and the earth did quake, and the rocks rent. The graves were opened; and many bodies of the saints which slept arose, and came out of the graves after his resurrection, and went into the holy city, and appeared unto many.” – Matthew 27:51-53

Matthew is the only one to report any of this. None of the other Gospel writers mention it, and there is no extra-Biblical support for it (as you would imagine there should be for such an extraordinary event).

One of the funniest commentaries about this I’ve ever read is from Thomas Paine in his “Age of Reason.” He sounds almost like Mark Twain here….

“It is an easy thing to tell a lie, but it is difficult to support the lie after it is told. The writer of the book of Matthew should have told us who the saints were that came to life again, and went into the city, and what became of them afterward, and who it was that saw them — for he is not hardy enough to say he saw them himself; whether they came out naked, and all in natural buff, he-saints and she-saints; or whether they came full dressed, and where they got their dresses; whether they went to their former habitations, and reclaimed their wives, their husbands, and their property, and how they were received; whether they entered ejectments for the recovery of their possessions, or brought actions of criminal conduct against the rival interlopers; whether they remained on earth, and followed their former occupation of preaching or working; or whether they died again, or went back to their graves alive, and buried themselves.” 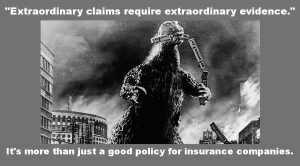