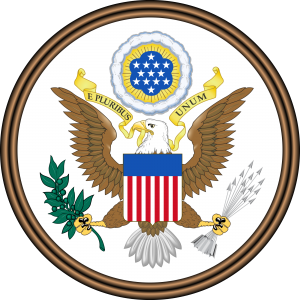 On July 4, 1776, John Adams, Benjamin Franklin, and Thomas Jefferson were appointed by Congress to prepare a design for the Great Seal of the United States. Although this first design was rejected, the motto it contained-“E Pluribus Unum”-was retained in the final design that was approved in 1782. As a result, “E Pluribus Unum” (Out of Many, One) became our de facto National Motto.

During the Civil War Era, eleven Protestant denominations began a campaign to add references to God to the U.S. Constitution and other federal documents. Their efforts resulted in the phrase “In God We Trust” being added to some Union coins.

Later, President Theodore Roosevelt expressed his disapproval, writing: “…it seems to me eminently unwise to cheapen such a motto by use on coins, just as it would be to cheapen it by use on postage stamps, or in advertisements.” He thought it came “dangerously close to sacrilege.”

In 1956, during the McCarthy era and Cold War “red scare” of communism, Congress passed a joint resolution making “In God We Trust” our National Motto.

Thus, our secular and all-inclusive Motto was superseded by a religious and exclusive Motto.

History of the National Mottos

E Pluribus Unum (Out of Many, One)

In God We Trust