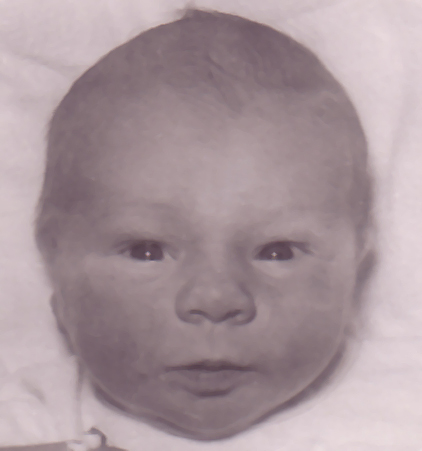 In the 1950s, a polio vaccine was developed, the helical structure of DNA was discovered, the first organ transplants were performed, IBM developed the computer language Fortran, and the term “artificial intelligence” was coined.

The construction of the Interstate Highway System had begun, the civil rights movement had started, the Kinsey Reports were published, Hugh Hefner launched Playboy, and Walt Disney opened Disneyland.

Sir Edmund Hillary had reached the South Pole, the U.S. Nuclear Submarine “Nautilus” had passed under the Ice Cap at the North Pole, and the Mid-Atlantic Ridge was discovered on the floor of the Atlantic Ocean.

There was a conflict in Korea in the early years of the decade, and Castro overthrew the regime in Cuba by the end of it.

There was a “Cold War” climate in America with concerns about communism. And it was a period of conformity, conservatism, and consumerism.

At the end of WWII the United States had emerged as the world’s mightiest military power, and an era of prosperity had begun. The economy was booming, the suburbs were booming, and babies were booming.

Consumerism was king as banks began to offer more loans and credit. People were buying new homes in the suburbs, new cars with tail fins and lots of chrome, new time-saving household appliances, and new black and white televisions. Owning a television in the early years of the 1950s was a rare thing. By the middle of the decade, just over half of Americans owned one, and by the end of it, over three-quarters had one.

There were also signs of rebellion in this conformist climate with an anti-materialistic literary movement that appealed to “Beatniks” and the “Beat Generation,” who challenged the restrictive social and sexual mores of the time. Another type of rebellion seemed to be taking place in the art world with the advent of abstract expressionism which shifted the center of art culture from Paris to New York City.

And while Jazz was the preferred music of the Beat Generation, a new type of “devil’s music” began coming to the fore by the middle of the decade. Rock & Roll was beginning to have an impact with teenagers that would only grow over time.

While they were a concern to some, comic books were popular, as was science fiction, and people were flocking to theaters to watch horror movies in 3D.

The “Jet Age” was just beginning to go commercial with the first international passenger jets taking off by the end of the decade. And the “Space Age” was launched in 1957 with the Russian spacecraft Sputnik. The U.S. responded three months later with Explorer 1 on January 31, 1958. It returned data for four months, discovered the Van Allen radiation belt, and signaled the beginning of  the “Space Race.” Later that year, NASA was born on October 1, 1958.

But before NASA was born, and while Explorer 1 was still sending back data, I was born into this world in Concord, North Carolina at Cabarrus County Hospital on Thursday, February 13, 1958.

Dwight D. Eisenhower was in the middle of his second term as President, and I can say I was born when there were 48 states in the USA and 9 planets in our solar system.

Also happening on that day: Ford introduced the 300 hp Thunderbird, the city of Hiroshima asked former President Truman for an apology for the atomic bombing, and New Orleans had to cancel a pre-Mardi Gras parade because of 2 inches of snow.

Elvis Presley’s song “Don’t” was topping the music charts, “Old Yeller” was the #1 movie, and Jack Benny was hosting a “Shower of Stars” television special later that evening on CBS to celebrate his 40th(!) birthday party which would be the next day.

Of course, I wasn’t aware of any of this at the time. I was too busy adjusting to my new environment.

It wasn’t long before I had my first picture taken (above) and I got my name in the paper (a name that would be legally changed 6 months later to the one I have now). 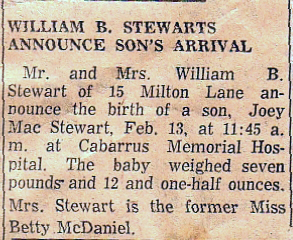